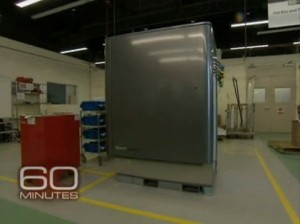 The energy machine recently featured on CBS’s 60 Minutes program has set the stage for a transition away from the 20th century electrical distribution model and it’s web of transmission lines strung across the countryside. View part 1 and part 2 of the video.

Bloom Energy’s K.R. Sridhar has been funded by well known venture capital firm Kleiner Perkins in Silicon Valley and has succeeded in creating a new fuel cell technology which creates electric power from oxygen and a fuel such as natural gas.

You may be asking what’s the importance of the Bloom Box if it requires fuel to run? Trial units installed at places like Google, FedEx and eBay are said to be saving 50% on their energy costs over conventional grid connected power.

That’s a worthwhile savings if the box isn’t too expensive to purchase and doesn’t require expensive ongoing maintenance long term – things that remain to be seen. The device appears to be somewhat complex and mass production is still a long way off since current manufacturing volumes amount to one a day.

Enlightened Technology is looking forward to demonstrating completely fuelless power generation technology in the near future. After all… the universe doesn’t require gas to make things go. Why should you?

In case you are not familiar with fuelless quantum energy technology, review some of our videos.